As a Styrian company, we would like to introduce you to a special plant that we use for the pumpkin seed oil. The pumpkin seed oil is made from the seeds of the Styrian oil pumpkin (Cucurbita pepo var. styriaca). This plant differs from the numerous other pumpkin forms by a unique feature: it has lost the lignifying seed coat as a result of a mutation, so that the seed core is protected only by a thin skin. The soft consistency of the cores allows the oil to be pressed. The intense green, red-fluorescent colour is due to the shell dyes dissolved in the oil. The oil is in the seeds. 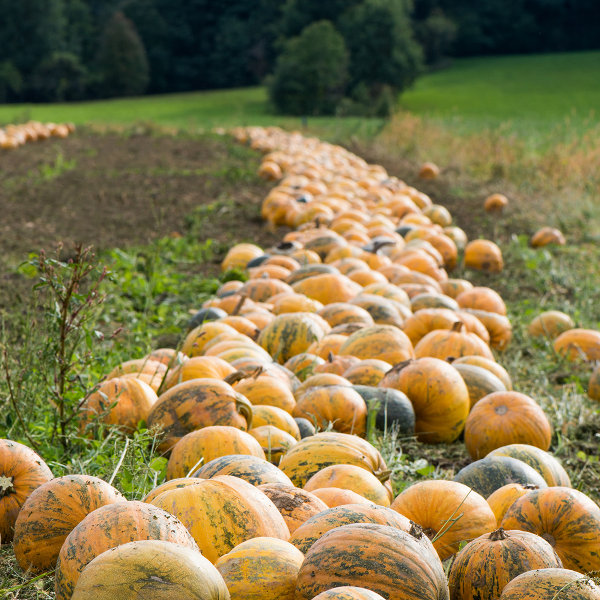 About 500 kg of kernels are harvested on a field of 1 hectare. These fresh seeds are then dried and cleaned. For 1 litre of finished seed oil (31.88 fl oz) about 2.5 kg of dried seeds are required. That’s between 30 and 40 pumpkins, depending on the year. The seeds are washed and dried at 50 °C, making them storable. It is stored in cold storage so as not to lose any flavours. The advantage over olive oil production is that pumpkin seed oil is pressed out of the stored seeds all year round as required, so that fresh oil is always available. Our pumpkin seed oil is rarely older than 1 month when it is sold. The dried seeds are crushed and finely ground. Add water and a little salt. And then it’s all mixed up. The water keeps the aroma and oil in the seeds during the subsequent roasting process. The roasting process is carried out at a low temperature to prevent the seeds from burning. The water evaporates again and roasting gives the typical aroma and clear taste. After roasting, the oil is pressed out of the cores with great pressure. The residue is called oil cake and can be used either as pumpkin seed flour or for animal feed. The freshly pressed oil is stored for a few days so that solid particles can settle. And then it is sold quickly to be fresh at your table.
Continue Shopping →
Item added to cart.
0 items - €0,00
Checkout
We use cookies to keep our website as user-friendly as possible. If you continue, we will assume that you have read our privacy policy and agree to the use of cookies. Oui, allez-y!Privacy policy